Let us travel from al-Khaleej al-Arabi to the northwest. Between Saudi Arabia and Turkey we find Palestine, Syria, Jordan and Lebanon; a region we Muslims know as bilaadu – Shaam,   بِلادُ الشَّام  and that which the French and English called the Levant “the land where the sun rises”.

The star of this region is the city of Jerusalem, which we call al-Quds. Why is Palestine and in particular Jerusalem so important to us as Muslims? Our Prophet sallallahu alyhi wa sallam said that it is one of the 3 masajid to which it is permissible to specifically travel.

Al Bukhari, Muslim and others reported from Abu Huraira that the Prophet. “Do not set out on a journey except for three mosques: Al Masjid Al Haram, my Mosque (at Medinah) and the Mosque of Al-Aqsa (Mosque of Jerusalem)”.

Masjid al-Aqsa was also the Qiblah, toward which the Muslims prayed until 16 months after hijrah to Medina.

The most important event showing the significance of al-Quds and Al-Masjid al Aqsa is The night of al-Isra wal Miraj, The Night Journey and Ascension. Allah mentions in Quran, the night in which our Prophet (saws) miraculously traveled with Jabril alyhi salam to Masjid al-Aqsa is one night and then to the 7 heavens.

ِAllah, Most High, goes further to show the virtue of Jerusalem and the lands around it:

And to Solomon [We subjected] the wind, blowing forcefully, proceeding by his command toward the land which We had blessed.(surah al-Anbiyaa: 81)

And We caused the people who had been oppressed to inherit the eastern regions of the land and the western ones, which We had blessed.

(Musa said) “O my people, enter the Holy Land which Allah has assigned to you and do not turn back [from fighting in Allah ‘s cause] and [thus] become losers.” al-Maida: 21

The explanations of the above 3 ayat in which Allah speaks about the blessed land, a Holy land, all point to not just Jerusalem itself, but the region of bilaadu Shaam.

Jerusalem, Baytul Maqdas, is a city that numerous Muslim prophets called home, from Sulayman and Dawood to Isa (Jesus), may Allah be pleased w

ith them. It is called in Quran a blessed land. Part of its virtue is that it is a fertile green land that bears many fruits. Agriculture is a big part of their economies. Here in Qatar, we consider Jordanian and Lebanese produce as ‘local’ produce and it is always plentiful mashaAllah. Peaches, grapes, dates, olives, almonds, apricots, citrus fruits, figs, pears,  cucumbers, and green leafy vegetables are all found in the markets, imported from Lebanon and Jordan.

In these times, Palestine is known in the Arab media as “occupied Palestine” فلسطين المحتلة That is because the land was overtaken by Zionist Jews after World War II, who consider it their religious homeland. With the help of England and the United States They renamed it Israel. Israel is internationally recognized as a country Palestine is not. So in the Western Media they will only speak of ‘the Palestinian people’, or areas such as ‘Gaza’ or the ‘West Bank’.        May Allah give honor to Islam and the Muslims in every place.

When I hear the word Lebanon, the first thing that comes to mind is…the food! When it comes to Middle Eastern food, Lebanon and Egypt are in stiff comp

etition to be the best. Lebanese food is known for variety and color; your mouth waters just seeing it hit the table at Shater Abbas (a popular Lebanese restaurant). Fresh grilled meat, seasoned and oh so tender,  fresh vegetables, blended dips made from eggplants, cucumbers, seasoned with mint, garlic, olive oil, and lemon. Green taboula salad is my favorite, full of parsley (so cleansing for the liver and kidneys) and bulgur, a high-fiber, low-fat whole wheat grain. I dip my bread in the humus, then the baba ghanoush, then into the taboula, then make a little sandwich with the grilled meat and dip it again… mashaAllah, so delightful!

While I have never been to Lebanon, I can only imagine that its high mountains and green fertile valleys are just as beautiful and refreshing in person, as in the pictures. Northern Lebanon also sees quite a bit of snow!   To the left, Lebanese women in hijab engage in a snowball fight in Faraya, one of Lebanon’s ski resorts. (Reuters: Mohamed Azakir)

The Hashimi Jordanian Kingdom, its official name, traces its lineage to the tribe and clan of our Prophet sallallahu alyhi wa sallam.

Surrounded by civil wars and destruction all round it, by Allah’s permission, Jordan has maintained safety and security. Jordan is the location of important historical sites. The Dead Sea, the lowest point on Earth, is believed to be the place in which Allah destroyed the people of Lut/Lot. The Dead Sea is at the border of Jordan, Palestine and Israel. It has such a high salt content that people naturally float in it but living things such as fish cannot live there.

10 Things You Didn’t Know About the Dead Sea

Petra is a historical and archaeological city in southern Jordan. The city is famous for its rock-cut architecture and water conduit system. Another name for Petra is the Rose City due to the color of the stone out of which it is carved. Established possibly as early as 312 BC as the capital city of the Arab Nabataeans, it is a symbol of Jordan, as well as Jordan’s most-visited tourist attraction. (wikipedia)

Here is a video about travel in Jordan. showing historical site Petra and more. There are subtitles in this video, so you can mute the music.

Syria, in Arabic Suriya, سُورِيا  is located north of Jordan and south of Turkey. As all of the Middle East, Syria is an ancient land inhabited for thousands of years a part of the Greek and Roman empires and before that. Aleppo, Halab حلب  is said to be the longest inhabited city in the world.  Damascus was captured by Muslim Arab forces led by Khalid ibn al-Walid in 634. Decades later, the Islamic Caliphate came under the rule of the Umayyad dynasty, which chose Damascus to be the administrative capital of the Muslim world. (wikipedia)

The Great Mosque of Aleppo (Arabic: جامع حلب الكبير‎‎ Jāmi‘ Halab al-Kabīr) or the Umayyad Mosque of Aleppo (جامع بني أمية بحلب Jāmi‘ Bani Umayah Bi-Halab) is the largest and one of the oldest mosques in the city of Aleppo, Syria. It is located in al-Jalloum district of the Ancient City of Aleppo, a World Heritage Site, (wikipedia)

The Umayyad Masjid before and after the war in Syria: 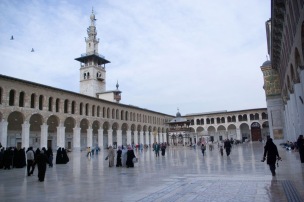 Since the war began, many schools and hospitals were targeted for bombings and have been destroyed. I interviewed a new Syrian friend named Raama who is from Halab. I asked her about the war. She said she was a student in a university outside Halab 4 years ago. Her and her classmates were having coffee in the cafeteria after classes when 2 bombs hit the university. “Glass was shattered all around us. Al-hamdulillah I was wearing a thick jacket, so the glass did not cut me. When we stepped outside the building and looked back, the building looked like a piece of cake that had been sliced on both sides with the middle still standing. I knew it was only the mercy of Allah that I was still alive. My mother and father were already living here in Qatar. They got a visa for me and I was able to leave.”

Just the other day while I was driving home listening to al-Jazeera I heard an interesting radio program about Syrians living underground. The journalists interviewed teachers at an underground school,

a doctor and a nurse in an underground clinic and everyday people who have carved out homes for themselves amid the maze of tunnels designed to protect them from the bombings.  There stories are sad, but at the same time I am amazed by their resilience, subhaanAllah!

Press the link to see this AMAZING underground playground in northern Syria!

Some phrases in the ‘Levantine’ dialect or lah-jah of Shaam.   You can compare these to the fus-ha which we learn in classes. What similarities or differences do you find?