Africa is a vast and diverse land mass, made up of numerous cultures, peoples, and languages. Yet despite its size, Islam swept over the whole Northern half of this massive continent from the Indian Ocean on its East to the Atlantic on its West and across the Sahara الصَّحَرَاء  (desert).

Africa is basically sectioned into 3-4 regions in terms of the Muslim world: al-Mashriq, al-Magreb, and the Horn

‏ Lord of the East and the West, there is no deity (worth of worship) except Him, so take Him as a Disposer of (your) affairs. (Muzammil:9)

When most people think of Egypt, they envision the Great Pyramids of Giza and Luxor and the face of Ramses II carved in stone, but aside from its Pharoanic history, Misr has a tremendous Islamic history as well. Mentioned both in the Bible and the Quran, this powerful country has been the backdrop of the stories of Prophets such as Musa (Moses), Harun (Aaron), Ibrahim (Abraham), Yusuf (Joseph), and  Ya’qoob (Jacob) alyhim assalaam. Misr was opened to Islam under the 2nd Khaleefah, Umar bin al-Khattab رضي الله عنه  and the military leadership of the Sahabi, Amr bin al-Áas رضي الله عنه in 645 A.D, about 22 years after hijrah.

Upon approaching Cairo from any direction, one of the first sights is The Great Mosque of Muhammad Ali Pasha, built between 1830 and 1857.  The mosque sitting on a hill,  along with its citadel, stands as a reminder of Egypt’s Islamic heritage which spans over 1,300 years.

Even today, students of knowledge from the US, UK and Europe, flock to Egypt to learn Quran, Arabic language and Islamic knowledge. With al-Azhar University and many active private learning centers, some students have been able to reach a high level of competencies, even as far as receiving an ”ijaza” : الإِجازَة  which is the grant of permission or authority usually represented by a certificate,  to indicate that one has been authorized by a higher authority to teach Quran or another subject of Islamic knowledge.

To the south of Egypt is Sudan. Sudanese m 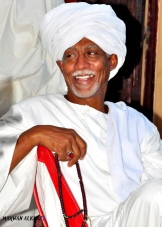 en are known for the large white turbans العِمَامَة and wear a distinguishable white thobe, with its wide arms and relaxed style. The women are known for their ‘thobé’ which is not actually a thobe but rather more like an Indian saree, wrapped from the waist and then over the torso and head.

Besides their distinctive dress, a major quality that Sudanese are known for is their sincere generosity and relaxed nature. In a Sudanese living room, it is normal to find single beds, decorated with pretty sheets, instead of sofas. After eating a large meal, you may be invited to ‘ to ‘lay down’ and let your food digest. So just relax!

The Magreb is now known as the official name of the country of Morocco, however in the past, the Magreb referred to Morocco, Tunisia, Algeria, and Mauritania. Magreb, like the name of the prayer after sundown, means the western region, the direction at which the sun sets.

The Magreb was opened to Islam under the military leadership of الصحابي الجليل The courageous companion, Úqba bin Nafi رضي الله عنه under the Khalifa Mua’wiya رضي الله عنه . This represented the spread of Islam from Arabia, the Red Sea, and all the way across to the Atlantic Ocean.  It is related that U’qba bin Nafi, upon reaching the Atlantic ocean, he rode into the water still on the back of his horse, lifted his eyes to the heavens and said, “Oh my Lord, I have done all that I can do. If it were not for this ocean, I would have continued to fight until none is worshipped except you!”

So it is no surprise that, like Egypt, this region has also a long history of Islamic and scientific scholarship. Beginning with Fatimah al Fihri, who grew up in an educated family and learnt Fiqh (Islamic jurisprudence) and Hadith. Fatima inherited money from her father which she used to build a mosque. Established in the year 859, the Qarawiyin mosque had the oldest, and possibly the first university in the world. Students travelled there from all over the world to study Islamic studies, astronomy, languages, and sciences. Arabic numbers became known and used in Europe through this university. This is just one important example of the role of women in education and an example of the heritage of knowledge in this region. http://www.1001inventions.com/

Five centuries later in the 1300’s the Magreb was still producing scholars such as Ibn al-Battuta, the Islamic judge, explorer and anthropologist, who traveled to China, Southeast Asia, India and upper Asia and all of the known Muslim world recorded his travels, observations and experiences in the book Ar-Rihla.

the right is the hijab that was worn in all 3 countries of the Magreb; Morocco, Tunisia, and Algeria. Called al-haik الحايك it was a full hijab in white. Sadly, it was after colonization by the French, then World War 2 and the rise of Arab nationalism, that the Muslim woman began to appear in the streets uncovered across North Africa.

Mauritania has been called “The Forgotten Country”. This country is known for producing eloquent scholars of the Arabic language and outside of Mauritania, many are well known by the name of  Shanqiti/ Shan-qeetee.  When we hear this name, we know the person has his lineage in Mauritania.

This region was all the lands around the Horn of Africa, now broken down into 4 countries; Somalia, Ethiopia, Eritrea, and Djibouti.

Remember our Prophet صلى الله عليه وسلم and the early Muslims made their first hijrah to this region and were protected by the Habashi/Ethiopian King Najashi.

When I taught Somalian students, they would always say ‘I know that word!’ ‘Oh, we have that word in our language!’ The Somali language has Arabic sounds and words in it and if we travel a bit more south we will find people speaking Swahili. What we call, lughatu Sawahil which is an Arabic/African language. It is

Wherever Islam spread, it brought with it the Arabic language. Just have a look and compare these Swahili words with Arabic words.