The shorts I wore the first time I walked into an Islamic Center,

looked something like these. I was a 22-year old confused Christian, who married a Muslim in summer of 1993. Yeah, the wedding day was really interesting. Imagine me in a low-cut white gown walking across the masjid carpet. I remember there were these older sisters who gently guided me into the bathroom and 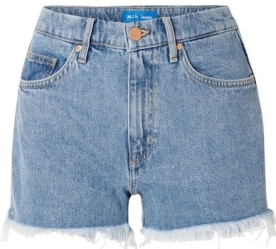 tried to cover me up with the lace veil. It was hopeless; I was exposed. I had no idea what was going on around me and I couldn’t understand why was it so important for me to be covered. Didn’t I just come there last week in my cut off jeans? After the wedding one of the ladies handed me a Quran. She said, “I heard that you study languages,”  “you may be able to learn the Arabic because that’s the original language of the Quran.”  She opened the Quran. I saw the English on one side and the other side what looked like a lot of lines, curves, dots and dashes, I thought, ‘Arabic looks impossible.’

The Quran became my best friend.

My first husband was still in the Army, so he was in Germany and I was in the New York , we were separated for months. I kept the Quran that the lady gave me after our wedding and it became my best friend.

I just opened it and started reading. There wasn’t exactly a ‘beginning’. At that time, I was reading the Yusuf Ali translation which contained many footnotes. Some of them under the stories of Prophets gave you the consequent Bible verses to refer back to. That was critical for me because the Quran was new.. I had not developed the trust in it yet. So it was helpful to refer back to the Bible and after some time, I put the Bible on the shelf…for good. I started using phrases like , what your hands put forth, and People of the Book. Every so often my eyes would drift over to the Arabic side of the page, and I would think, one day… one day…

When he came home from Germany, he brought Dr. Bilal Philips book on Tauheed. “You think you can believe in Allah any way you want to?!” that’s what my first husband said to me as he handed me the book. It seemed like he became so MEAN all of a sudden.  He wasn’t mean when I was wearing the cut off jeans though.  Now that he had made Hajj and had been to Medina with the students of knowledge, everything had to be just so…especially my clothes.

My first attempt at wearing a face veil was in Milwaukee, Wisconsin while I was still in college. We fought about it for days. Finally he said, “You know, as your husband, I can order you to wear that veil.” I didn’t budge. The next day he tried another tactic,  he took out a bag and acted like he was leaving me, ‘that’s it!’ he shouted ,” you don’t know who’s the man around here.” Then I gave in,  put the niqab on my face… and I became the meanest wife in the Midwest. I’m laughing about it now; we were both so young and foolish!

We moved to Atlanta and joined a community where all the sisters dressed in black and covered their faces. I could see how that set us apart from other communities. I became another person, so different than the college girl wearing cut off jeans.  I was a Muslimah. I was wearing black. I was a part of the saved sect. My family would never understand. The religion and my new friends provided many reasons to stay away from my family…far away.  One day my Aunt Jan surprised me with a phone call. “you know, your Grandmother was very hurt that you didn’t call her on her birthday.” I said, “that’s against my religion to celebrate birthdays.” My aunt said, “she was your grandmother before the religion!” I kept my guard up. I was very good at numbing myself. (I realized later.)  I am upon the Truth, they just don’t understand, I thought. Anyway they couldn’t tell me what to do, they were in New York, I was in Atlanta. I was “free”.

I remember one email I got from my younger sister asking me, ‘Will I ever see you again?”  She was in college then; she needed me. I tried to be oblivious to the fact that my family missed me especially the older ones. And then something happened, it was like my younger siblings and cousins just…forgot me. I became a non-issue, someone who did not matter. They didn’t know me…Actually…I didn’t even know me.

From 1995-2004 I lived in Egypt and Saudi Arabia I studied, I learned I had countless adventures and have many stories to tell. But who was I?

in my hometown New York City it was a shock. I used to walk through those buildings every morning to take the A train when I worked in the Village. It felt like a personal attack. I ran upstairs to my neighbors to watch the news. Then I went to the Call Cabin and got on the phone with Umm Medina; she was from Queens. We were both in shock. I asked her, ‘Do you really believe Arabs/ Muslims did this?” We both paused….‘Naaah! Get-atta- heya”  A part of me was like what am I doing here? I should be there with my people, my family! I was conflicted and confused.  By then my 1st husband had left for AFrica never to return (that’s a whole other story).

I was living in Medina, as an Arabic speaking American. Arabic was my everyday language by then, there was no English spoken on the street. All my neighbors and co-workers except 1 were Arabs or Arabic speaking.  I had been ‘adopted’ into my Yemeni family (another story) who I was with every weekend. Had I become an Arab? Who was I?  The wake up call was when I heard George W. Bush’s voice through VOA, ‘you are either with us or you are with the terrorists’. How can he say that?? The Iranian president came on the next night and replied ‘we are not with you and we are not with the terrorists! ”

over the next weeks we got to witness the pseudo-investigation in America and the real  investigation in the Middle East from Syria, to Saudia to Egypt. Arab journalists were on it uncovering the lies.

At least I knew that much, yet many layers were to be pulled back and examined.

Are you a re-vert Muslim? What’s your Shahadah story? Share it below or on our Facebook group.